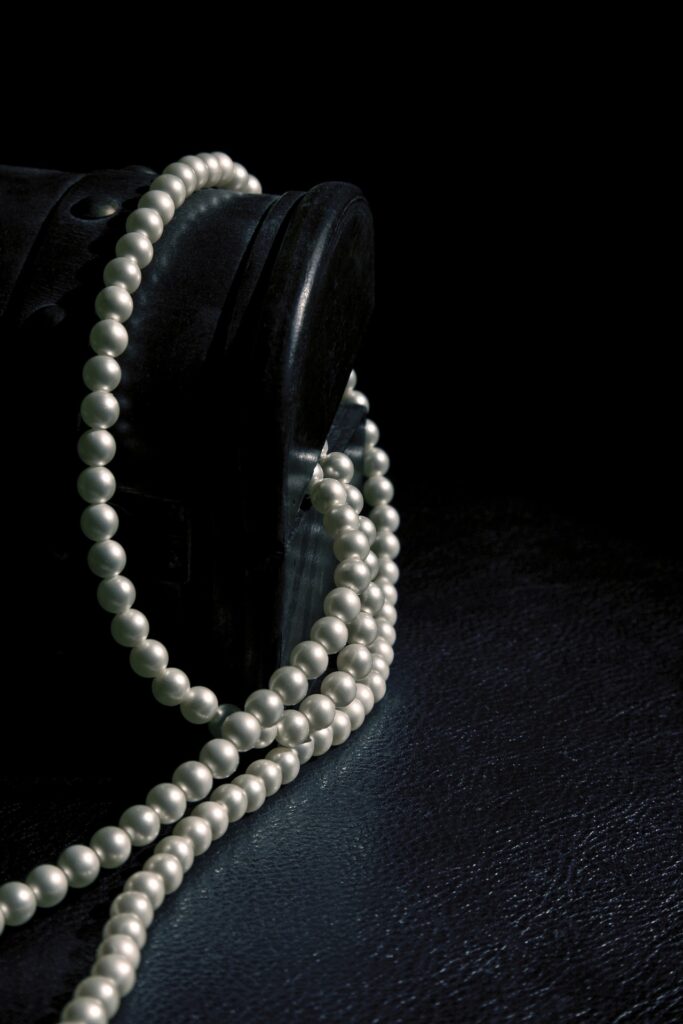 “… I tricked myself into thinking that this necklace is worth a lot more than I paid for it.”

I get to the end and there’s this jewelry case, and I look down at the very bottom and there’s a Heart of the Ocean necklace sitting in a box and I’m like, “I’ve never seen that. What is that? That’s cute.” And it gave me memories of cosplaying Rose as a kid. I was like, “It would be really cool to have, like, an actual, like, version of that instead of, like, this crappy painted kids necklace,” which I still have as a keepsake for various reasons. And as I look closer to it, it was in a box that had Celine Dion’s name on it. I’m like, “Oh, wait. This is like official? Like, maybe not like Titanic official, but like, this is like Celine Dion official?” And I didn’t have any internet and this was years ago. So like even – I would not have been able to look this up and I couldn’t so I didn’t, and the price wasn’t that bad. It was like 15 bucks. And I was like, “You know what? If this was just a random necklace, like this is obviously costume jewelry.” And I was like, “If this was a – just a random necklace, I would not pay 15 bucks for it, but I like Titanic. It’s got childhood memories, and it’s cute,” so I bought it. I’ve kept it around in various places, like on my desks and, you know, stuff like that, just around. Didn’t wear it. Just kept it around. I would hang it from things, just to be able to look at it. Actually with the old necklace from that – when I was a kid.  And then this past year, I had a lot of stuff change, and I don’t know. I just felt compelled to start wearing it, so I did. And it’s sort of like a comfort object for me, something that’s like always around, you know, ’cause I wear it all the time. I don’t take it off, like, ever. Maybe if I’m doing, like, a particular job or something, where like you can’t wear jewelry or something, but that I – it’s like a wedding ring. I don’t take it off. So I was kind of wondering about it because I hadn’t – like I said, I hadn’t been able to look it up and I kinda forgot to look it up after I bought it, so I didn’t really know much about it. And so I looked it up, and I was like, “Celine Dion, like, Heart of the Ocean necklace,” whatever, ’cause I didn’t have the box for it anymore. It’s – I mean, I do, it’s somewhere, I just don’t know where. And I looked it up and I did some searching. I’m like, “What? This is worth like a hundred dollars?” It was like, “This necklace that I bought for like 15 bucks is actually worth like a hundred bucks or something.” And I said, “Wow, that’s really cool. I should treat this thing a little better.” So, you know, it’s been like a good – I don’t know. A few months and I’m like, “Is that really the price though? Maybe I should check, I kind of wanna know, like, what it’s going for now.” So this time I did a more thorough search and I actually found the brand, which is Avon, and I found the name of it is called the Romantic Heart Necklace. It is worth more than I paid for it. It’s just not worth $100. So it’s worth around, it looks like 30-ish and it has a set of matching earrings, I learned. I don’t know if it came with it or not, or if that was a separate purchase. I don’t have pierced ears, I don’t care. So it was funny to me ‘cause I’m like, the reason why I thought this was originally worth more than I bought it for was because I’d searched badly for it. Like I didn’t know the terms, I didn’t know the brand, I didn’t know the year, I didn’t know there’s a name for it. So like I tricked myself into thinking that this necklace was worth a lot more than I paid for it, when it was like a negligible amount. So I don’t know, that just gave me a good laugh.