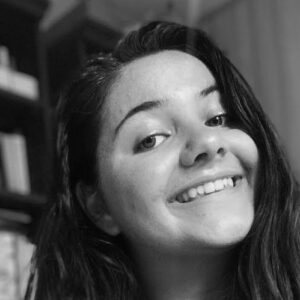 "I still liked to imagine after that that there were... hard floors on top of the clouds." One of the questions for this week is, "Have you ever been in a thick fog, where it was difficult to see what was in front of you? Where were you?" One of the first times I remember ever being in a fog was when I was about five. I think I had been asking a lot of questions about clouds and like, if you could stand on clouds, if you could kind of hold on to them, like if you could walk on top of them, that was something that I really like very strongly believed as a child. Is that like the clouds were sort of fluffy underneath, but like, on the top, they were like flat and hard and solid and, if you got up there you could walk on top of them. But so I had been asking all of these questions, and then one morning very early, I think before the sun was up really, my mom woke me up and took me outside. It was very foggy. It was a summer day, but it was very cold, and there was like a thick fog very low to the ground. And we were walking around. My mom said, this is a cloud. So, all of the questions, all of the things you're wondering about the clouds up there. That's the same thing that this is, so right now, you're walking through a cloud. These are just low to the ground clouds. And I remember that very, very clearly. It was just like — my mom has always been good about sort of explaining things to me in, like, a physical way, um like a teacher, which is something that, like, her mom used to do for her. But it's just something where I still liked to imagine after that that there were, you know, hard floors on top of the clouds, but then I knew that that was just something in my mind and that I could walk through clouds and I had done it.

Comments Off on Hannah Thukral 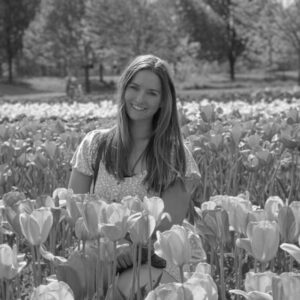 "Today I'm feeling thankful for nature and these opportunities." Lately my focus has felt off, maybe at times even bit foggy, but with the transition of ending spring semester into summer break, things have felt off balance. Summer classes and work are now in full swing and I'm preparing to move into a new place very soon. All very exciting things, but still stressful nonetheless. For the long weekend, I've been visiting my partner's family. We celebrated the wedding of a close friend and spent a lot of time outdoors. This weather's been wild for Michigan. I can't believe how warm the past few days have been. After a long day of adventuring on the dunes near Lake Michigan, we decided to wind down by the hot tub. The sky happened to be clear for the first time in a while. So we were watching the stars appear as the sun went down and enjoyed the constellations as patterns began to paint themselves across the sky. We'd only gone out to relax for a little while until my partner gasped and said "no way". Instead of getting ready to get out as I had been before, I paused and joined him as he pointed to where he saw the meteor fall. What was planned to be a short trip outside transformed into something longer. We were determined to see more of these shooting stars. They were so beautiful. Our efforts proved to be worthwhile as the stars shone above the warm summer breeze. The beauty of it all really helped me to clear my mind and remember that all the stressors in my life right now are part of the bigger picture. Just as each of those stars played a role in creating the beautiful sky for us that night. Today I'm feeling thankful for nature and these opportunities. It always seems to be the best relief for a stressed-out mind.

Comments Off on Hailey Deptula 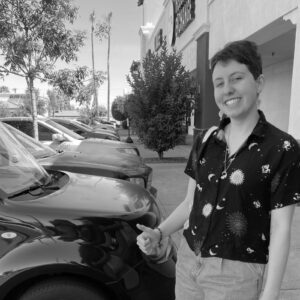 "I found "Rainforest" by Walter Wanderley." I recently visited my friend in Arizona. She took me all around the towns where she's lived. She showed me a lot of different things, and I ate a lot of good food. She took me to her favorite fast-food restaurants. My favorite out of all of them was Cane’s; their chicken was so good, and I did find out that they're making some near me soon, so I'm going to be hitting those up constantly because it was so good, would highly recommend Cane’s to anyone. But also while we were there, we went to a musical instrument museum and that was really cool ‘cause I love music, I love musical instruments. They had -- it was literally musical instruments from all over the world. I was really happy to see the khaen from Laos, that was the coolest one that I was hoping was there. They also had a huge upright bass called an octobasse. That was crazy too. And I loved seeing all the different violins ‘cause I play violin. And we also went horseback riding. That was really, really fun because I used to ride horses and it's been like -- I think I did the math and it was like eight years since I've been on a horse, and this was Western style, but I used to do English, but it's like, fundamentally -- like I knew what was going on, and it was just so much fun to be doing that. And honestly, the highlight of my whole trip besides getting to spend time with my friend, which was obviously incomparable, was I found this record that I had been looking for, like a vinyl. My -- one of my favorite musical artists is Brazil's number one organist, Walter Wanderley, and my favorite album by him is called “Rainforest.” And every time I go into a record store, I search high and low for this record, and I've never been able to find it. Well while I was there with her, we went to a record store, and I found it -- I found “Rainforest” by Walter Wanderley. When I say my heart was pounding, I mean it. It was awesome, a great trip, so many highs throughout it. It was just phenomenal -- loved being with my friend, loved being on a horse, seeing musical instruments, and…

Comments Off on Olivia Marquardt 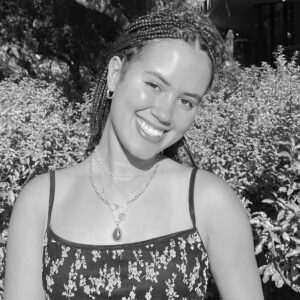 "I jumped off the rock, and immediately, everything went black." So I had been kind of sitting in my kayak at the water for an hour or two, and I just decided to go investigate the cliff. Um, I kind of walked up, like with my friends, they were cheering me on. I kept telling them, "I’m still not gonna jump off of it, I just want to see,” so I walked to the edge of the cliff. It was more of a rock — we’ll call it a rock. I walked to the edge of the big rock, twenty feet, um, and I kept telling myself, “I'm not gonna jump off of this, I just wanna see what the view looks like.” I walked to the edge of the rock, and — Do you ever have those moments where, like, your body decides to do something that your mind has yet to agree to? In my case, that is exactly what happened. Without my mental consent, to my complete lack of knowledge, I jumped off the rock, and immediately, everything went black. I had jumped off the rock and passed out in midair. Fully blacked out. I hit the water, not knowing what had happened — I had blinked, and I had gone from the top of the rock to the water — I was spluttering, coughing, I think I was so disoriented from passing out that I, um, had forgotten how to swim. My friend had to paddle into the water and pull me out, and everyone was like, “You jumped off the rock!” and I was like, “I guess I did jump off the rock, but I don’t remember doing it, I don’t remember deciding to do it,” and in that case, I think my body had wanted to do something that my mind hadn’t agreed to. I was told that there was a photo taken of me jumping off the rock, I have yet to have seen this photo. It’s been five or six years. I still wonder what I must have looked like jumping off of it while being passed out in midair, um maybe one day I can reunite with that photo, but definitely after that experience I told myself I was never going to jump off another rock into water again, and I’ve enjoyed telling the story ever since.

Comments Off on Olivia Jessner 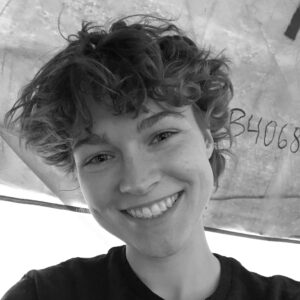 "I printed out the logo for Zoom and I stuck it on my pumpkin..." So, one of the prompts that I really liked was “what is your favorite Halloween costume that you have ever worn?” and, um, instead of that, I’ve decided to talk about the best pumpkin I'd ever carved, ‘cause I’ve got a good story for that one. So, in the fall of 2020, I was at home living with my parents because college was online. It was the height of the pandemic, and I wasn’t allowed to go back. So I was stuck there. Um, and, hopefully, hopefully, things would be okay in the following fall in 2021, so I was living on the assumption that this Halloween would be the last Halloween for a while that I got to carve a pumpkin with my little brother. Uh, so, I decided I was gonna go all out. Um, and, you know when you get, like, a pumpkin and you wanna turn it into a jack o’ lantern, usually you try and carve a face onto it – I know my brother has done, like Star Wars characters in the past. Um, I think I did Star Wars characters in the past. But I decided that this was going to be the year that I did something scary on my pumpkin, and I started to come up with ideas of “what is the scariest thing that I can carve into this pumpkin?” Uh, and, as a college student who is taking classes online, getting up – living in – on the east coast but doing all my classes on pacific coast time, um, staying up ‘till three in the morning doing homework ‘cause all my classes started at noon, the scariest thing that I could think of was taking school online. So I went to the printer, and I printed out the logo for Zoom and I stuck it on my pumpkin and I carved out the Zoom logo and I sat that on our front porch. And I was so proud of it. I took a ton of pictures. I sent it to all my friends. I thought I was so clever. But, uh, I think to this day that is my favorite pumpkin I’ve ever carved. And I don’t think that I can top that. I think that the cultural consciousness required to fully understand and…

Comments Off on Abigail “Jayce” Garner 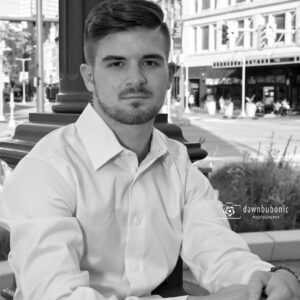 Alumni
Comments Off on Anthony Delsanter 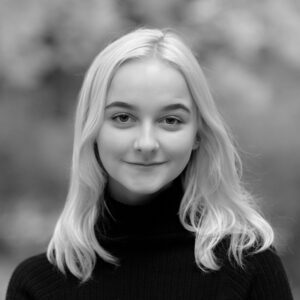 Alumni
Comments Off on Cameryn Hatfield 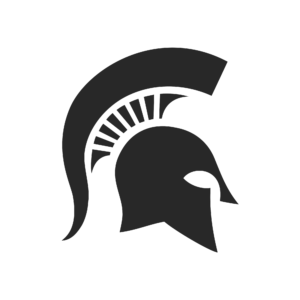 Alumni
Comments Off on Holly Ryan 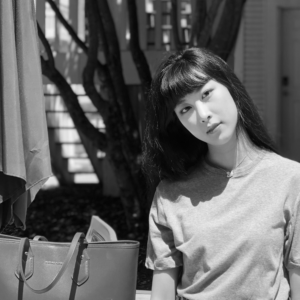 Alumni
Comments Off on Yichen Wang 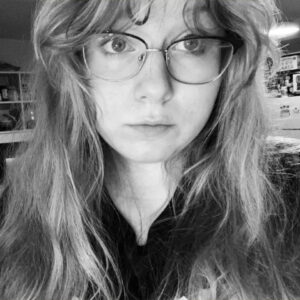 Alumni
Comments Off on Whitney Kuta