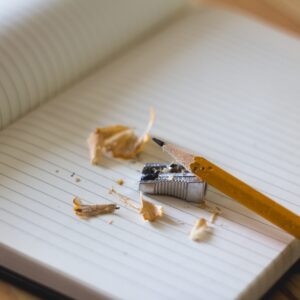 One story is, so we have like these weird weekly Spanish vocab tests and I'll just say, I never studied which I'm not really proud about. But, yeah. Anyway, so we'd pick our own vocab words. I would pick the easiest words to ever – to, like, to be possible, like the easiest words possible each week and I would just get a guaranteed good score. Like it was just broken. So all I had to do was look at the list, pick the easiest words and then I’d write the vocab words for the test and then I’d get an easy grade. So anyway. I mean, I haven't been studying for tests up until this year because it's high school and I guess it's starting to get important, but I don't enjoy studying so I don't do it very often. I mean, usually, I just remember the content of tests without having to, you know, study for it or anything like that. But I am – my greatest fear is that one day I will not be able to just not study and I’d be required to study, which absolutely sucks. Like, that day would be like – that is my biggest fear.

Comments Off on “That is my biggest fear.” 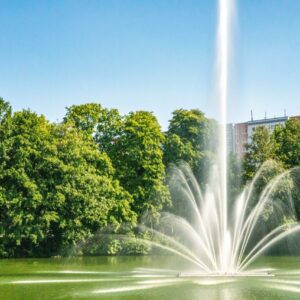 I thoroughly believe that if we had a Christmas tree with it, like, embodied, Michigan, it would be, like, some way, shape, or form made out of water. It's ridiculous. But I mean, we are the Great Lakes State, right? So, like, maybe like a pole or something could be, like, there, and then there's, like, just water shooting up of it and it, like, goes down in, like, these cascades and makes like a waterfall, you know. I don't think it's actually, like, possible, like scientifically, but it's still cool. And I'm pretty sure – I feel like that's what would embody Michigan the best. Maybe, like, we could add a bunch of apples to it. Like just, like, throw some apples onto the water. And, like, then it would be great. Um, maybe – I don't know, like, maybe some deer, too. Not like real deer, you know, like just, like, ornaments of deer and we could, like, put them all around the tree and that – I feel like that would help embody, because, like, Michigan has a lot of wildlife. And I mean, we could also, like, represent the huge different amount of seasons because like, I've lived in other places and I know that there's places where it's, like, cold all year round or, like, warm all year round. However, we experience all four seasons. So maybe like each corner can be, like – first, it's super hot in the summer, which it can be, like, yellow and then the other side's, like, blue to represent winter and then we just have, like, cherry blossoms to represent the spring and, like, a bunch of dead leaves to represent the fall. I think that would be cool. So pretty much I think a tree would look like a giant pole sticking out of the earth. It's making, like, water. So like to shape the tree, with a bunch of apples on it and deer ornaments with each side of it being a different season.

Comments Off on “But I mean, we are the Great Lakes State, right?” 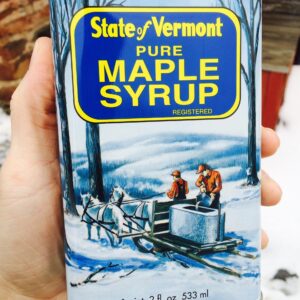 We did make it to the capital of Vermont, which I'm blanking – it’s not Burlington. Is it Burlington? Um, and that was pretty great. We got like a touch of what I imagined New England felt like. I remember, the architecture on the houses – once we, once we got closer to a degree of civilization, there is that, like, New England feel to the houses, which I'm totally blanking on what they’re called, what you’d described it as. But definitely ended up getting, like, “Man, yeah, this does kind of feel like I'm out here in New England.” It was – I loved it. I loved the aesthetic. I made sure, of course, to be a full tourist and I bought some Vermont maple syrup. I know we have maple syrup in Michigan, but I don't know. It was kind of cool to buy the Vermont style and the tin that it came in was so – I loved it. I loved it. I loved the design of it all and even after I finished all that maple syrup, I remember I washed that tin out and I used it as a water bottle on my next road trip out west.

Comments Off on “I made sure, of course, to be a full tourist.” 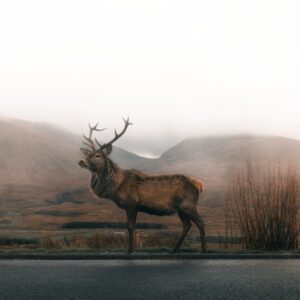 Anyway, we come around this bend in the road, and there's this magnificent stag elk. Um, it’s coming up the side of the road, up onto the road. He's got the whole, uh, the whole family with him. He's got the little ones and then the mom, and all of ‘em, all the, all the elk, the whole – his whole elk family. And so he's like the crossing guard, he comes out into the middle of the road and just stands magnificently, mind you, until the whole family gets across and then he kind of takes his magnificent head and kinda shakes it a little bit and continues his walk like, “Yeah, you mere humans,” you know. Anyway, a couple of times we saw elk on this route. Some real similar experience – magnificent animal, my gosh. They just, they’re just amazing. But the one guy – was driving, we used to carpool, and he, uh, starts beeping his horn at this elk and the elk kinda snort and looks at him, like, you know, “Really?” And I said, “What the h***’s the matter with you, stop beeping your horn, you want him to charge the car? You know, you got this Ford Astrovan,” or whatever it was. And, uh, so he stopped beeping the horn, anyway, and we gave the elk and his family time to cross, but that was probably the most magnificent animal I've ever seen in person. Or I guess that would be the coolest.

Comments Off on “And so he’s like the crossing guard.” 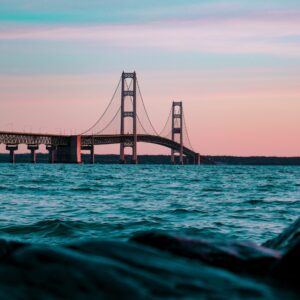 Oh, I know. You gotta go across the Mackinac Bridge. I mean, there's nothing like the Mackinac Bridge and the fact that our state is separated by that distance, and spend time in the UP. UP is the better half of Michigan. So, definitely need to go and do the bridge and see Mackinac Island. I mean, there's, you know, iconic, historic treasure that we have with Mackinac Island. Has to be on a list of things to do that are unique to Michigan. And I'd add to that and say, you know, up by Petoskey, just hunting for Petoskey stones. Whether you find one yourself on the beach or not, you gotta go look for them and then all the rock shops up there, you have to buy a Petoskey stone if you don't actually find your own. And you know, with them polished and varnished, whatever they do to them, to make them so shiny and beautiful and bring out the pattern is really cool and unique. So, that's another item unique to Michigan.

Comments Off on “There’s nothing like the Mackinac Bridge.”