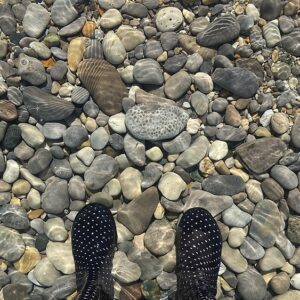 What's the coolest thing you think you've ever found on a beach?  We once went biking, and then we came across this little private beach area, but it was like really weird 'cause it was clearly a public beach but then it was covered up by vines. And when we went down there, we found like this whole camping set up sort of thing, but it looked like it hadn't been used or touched or anything in so long. Do you remember that?  Uh-uh. It's really cool. What lake was that on? Michigan. So you found a -- an abandoned campsite. Have you found anything else that's kind of cool on a beach? We found a potato rock, a rock that resembled an actual potato. Other than that, I don't think so.  You don't think Petoskey stones are cool? Well, they are, but they're pretty common. There's always Petoskey around.

Comments Off on “We found a potato rock, a rock that resembled an actual potato.” 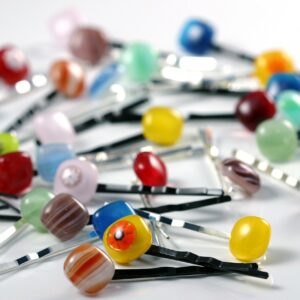 Have you ever tried to do your own 70s-inspired Hairstyle? What was it? So I have never tried to do my own 70s hairstyle, but my sister has. So over the pandemic, me and my sister both had online learning, and unlike me and I woke up ten minutes before class. My sister would wake up five minutes before class. And so she didn't have time to fix her bad hairdo. And so what she would do is she would prop up like the hair -- like right at top of her head, right above her forehead, she'd prop it up to this 70s hairstyle when you have like a big mohawk thing on the top of your hair. And it would look beautiful on Zoom. But whenever I would walk in on her, whenever she would come down to eat or something, and we saw her hair, it would crack us up because it looks so 70s, but it also -- there're just so many clips and stuff propping it up that you couldn't see on Zoom. We thought that was hilarious, especially if she like kind of turned her head or something, and people saw the clips, it would be hilarious, but that didn't happen to her. 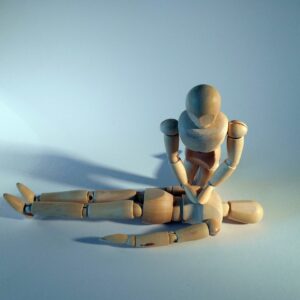 The beat for “Staying Alive” by the Bee Gees, yes! I know it is the best deal to do CPR. I have been, uh, involved in EMS since 1971. I was a paramedic for 30 years, licensed paramedic, in Michigan for 30 years. So I have been trained in CPR. I have had to use it and the first couple times working as an EMT, I had to use it. I was a little, uh, I was a little hesitant. I mean, I worried about not doing it right. But as my then partner told me, he said, “You know, if you don't do it, even if you do it wrong,” you know, quote, unquote wrong, “they still have a chance. If you don't do anything, they have no chance at all at life.” I have seen, when I worked as a paramedic, I have seen -- we had a couple of people recover because they had witnessed arrests and CPR was done, immediately, on the scene. And these two individuals were, uh, survived their heart attack, because CPR was immediately done on the scene until we were able to get there and do advanced life-support measures. So yeah, I've been trained in CPR. I haven't been retrained lately, of course, for years, but I have had to use it and I've used it with some success.

Comments Off on “Even if you do it wrong, you know, quote, unquote wrong, they still have a chance.” 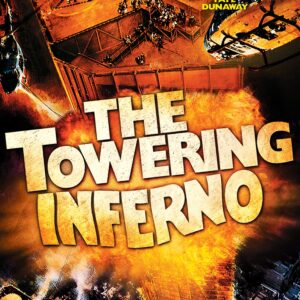 I have taken the bait and I'm going to talk about the 70s. A little bit about fashion long hair was it, long straight hair.  My boyfriend/ husband -- his graduation picture is almost embarrassing. His hair is long and kind of ugly. I remember goofing around with a bunch of kids and putting his hair up in pigtails. I mean you could, and it was that long. Bell-bottoms were it. Leisure suits, really ugly, big ties. And for the first time, I remember when men could wear colorful shirts. And for the first time, I remember that switch from wearing like only a white shirt underneath the suit, like for church to being able to wear a colored shirt. It was like a big deal. Okay, and then a little bit about popular culture. I remember movies, Saturday Night Fever, John Travolta in his leisure suit, dancing away. And disaster movies seemed to be the thing. Jaws. Yes, the first date I went on with my future husband to Jaws. The Poseidon Adventure and Inferno and after watching Inferno, I decided that maybe when I thought about the people in that building, in that burning building and if I was in a burning building and could only save one person, who would I save? I kind of thought, hmm. Maybe it would be ***.  Do I love him? Is that what love is? There you go. That's my memories of the seventies.

Comments Off on “…if I was in a burning building and could only save one person, who would I save?” 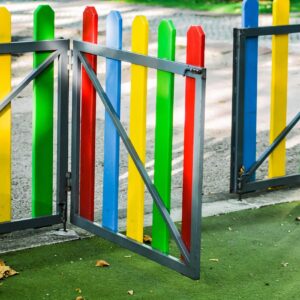 If I remember the 70s, what something that I miss from that era?Well, in the 70s, in 1970, I was nine years old. And I grew up in that. So from age 9 to 19, I mean, it was my formative years. I missed the tight-knit family that I had, I miss being free to go outside to hang out with my friends go bike riding and do anything we wanted to do. My mom would open the door in the morning and shoo us out and we come home for lunch, and then we were to come home when the lights came back on. I miss that freedom. My kids had a little bit of it growing up, but I was much more conscientious of where they were, and what they were doing than my mom was. And now my grandchildren, don't get to go outside and play without my daughter right there. If the kids are biking, she's sitting on the porch watching them and they're not going far. You know, we used to go and make mud forts, and we would make these massive cities out of dirt, and we'd use our little matchbox cars and we'd work on them for hours in the sun and we'd run home and get popsicle sticks for this or that, or we you know, we would play. And I think that's what's missing now, is just play. Everything is organized and watched. And I miss that.

Comments Off on “I think that’s what’s missing now, is just — play.”